The weekend of 29th and 30th September saw the culmination of our 50th anniversary celebrations. On the Saturday, exactly 50 years on, we ran a reconstruction of the first ever quizwalk, a circular route from Reigate Station about 10.6 miles long, which we shortened slightly to around 9.5 miles for the rewalk. The next day we continued our celebrations by holding a lunch at the Reigate Manor Hotel for club members past and present. Attendees at the lunch were given copies of a finely illustrated Souvenir Edition booklet to commemorate the previous day's walk.
Having been on the original walk on 29th September 1957, I was delighted to be part of the team that organised this event. 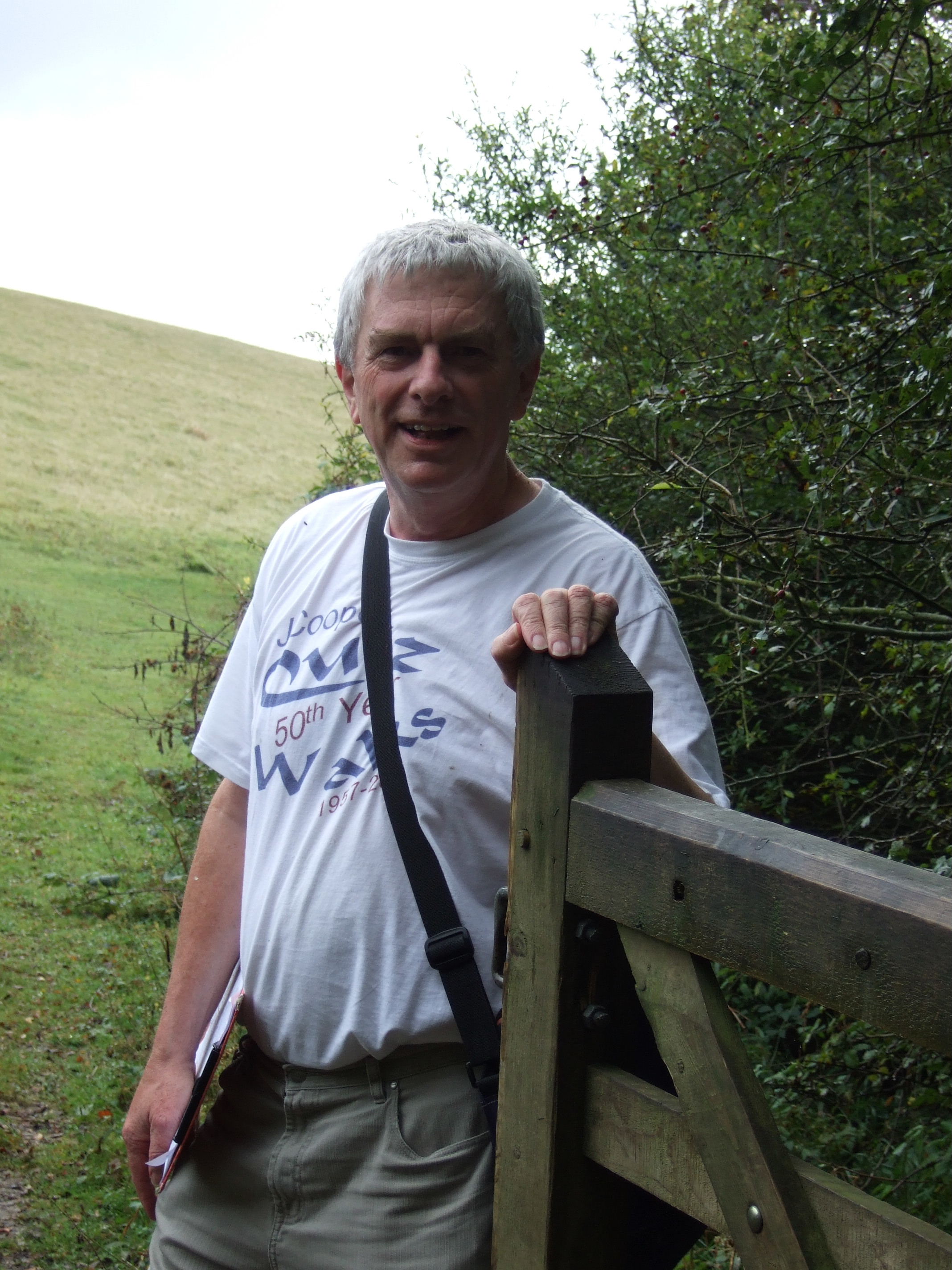 Roger Heath on Reigate Hill during the rewalk planning

Back in June 2006 we set up a committee, chaired by James Biggs, to organise our 50th year celebrations for the following year. Also on the committee were Roger Abbott, Geoff Hunt, Alan Reeves, 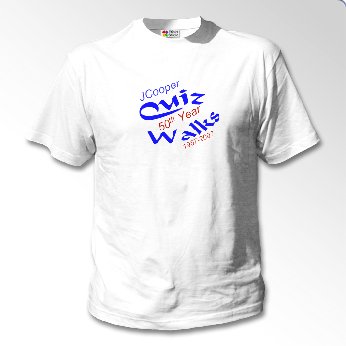 Rose and me.
Early on, at Geoff's suggestion, we procured from a website he'd identified special 50th anniversary T-shirts and polo shirts for quizwalkers to wear in the anniversary year and beyond.On the back of the shirts (not shown in the images here) was our website address, www.quizwalks.com

One of the key early tasks was to work out which way the original walk went. For that, courtesy of Les Bradbury's archive material, we did at least have a copy of the original route sheet, although the directions in it were somewhat sparse and imprecise, on top of which nearly fifty years had gone by!

Anyway, following sorties into the Surrey countryside by Alan, Geoff, Roger and myself we were able work out with, we reckon, about 95% accuracy the route taken by that first quizwalk on Sunday 29th September 1957.
Starting from Reigate Station it went up Colley hill, west along the top of the North Downs, then descended past Betchworth Station and continued to the Dolphin pub in Betchworth itself before returning to Reigate along what is now part of the Greensand Way. 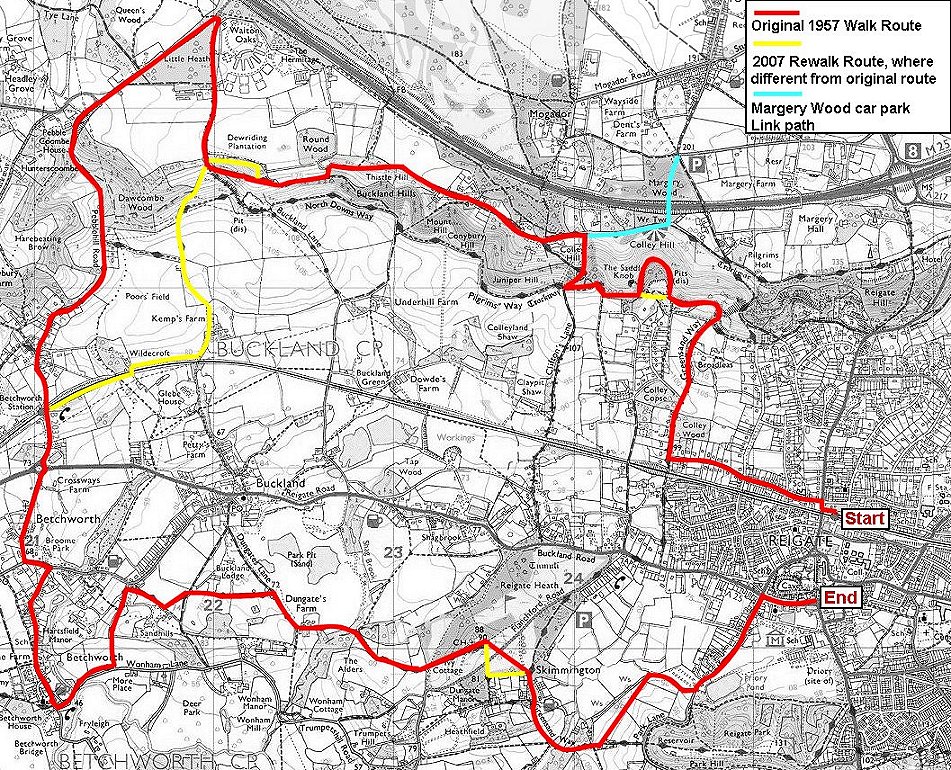 We decided to use the Dolphin as the lunch stop on the rewalk, which meant we had an outward leg of about 5.75 miles and a return leg of about 3.75 miles. We agreed that I would organise the outward leg and Geoff Hunt and Alan Reeves the return one.
To speed things up on the outward leg I set only three token cryptic clues, all of them at Betchworth Station. On the other hand, the return leg was an ideal length for making it a showcase quizwalk - and that's exactly what Geoff and Alan did, setting the standard quota of 25 cryptic clues.

Try as we might neither Roger Abbott nor I was able to get radio or television coverage of our anniversary celebrations. This was a bit disappointing since in 2000 we were featured on the radio programme Open Country after a researcher of theirs happened upon our website.

However, I did have some success with the local press in Surrey. In addition to the two snippets you see here from the Redhill and Reigate Life (left) and from the Dorking Advertiser (right), I managed to secure a major feature for us in a widely distributed weekly publication called the Surrey Mirror. This was published in the 13th September edition and is reproduced below. 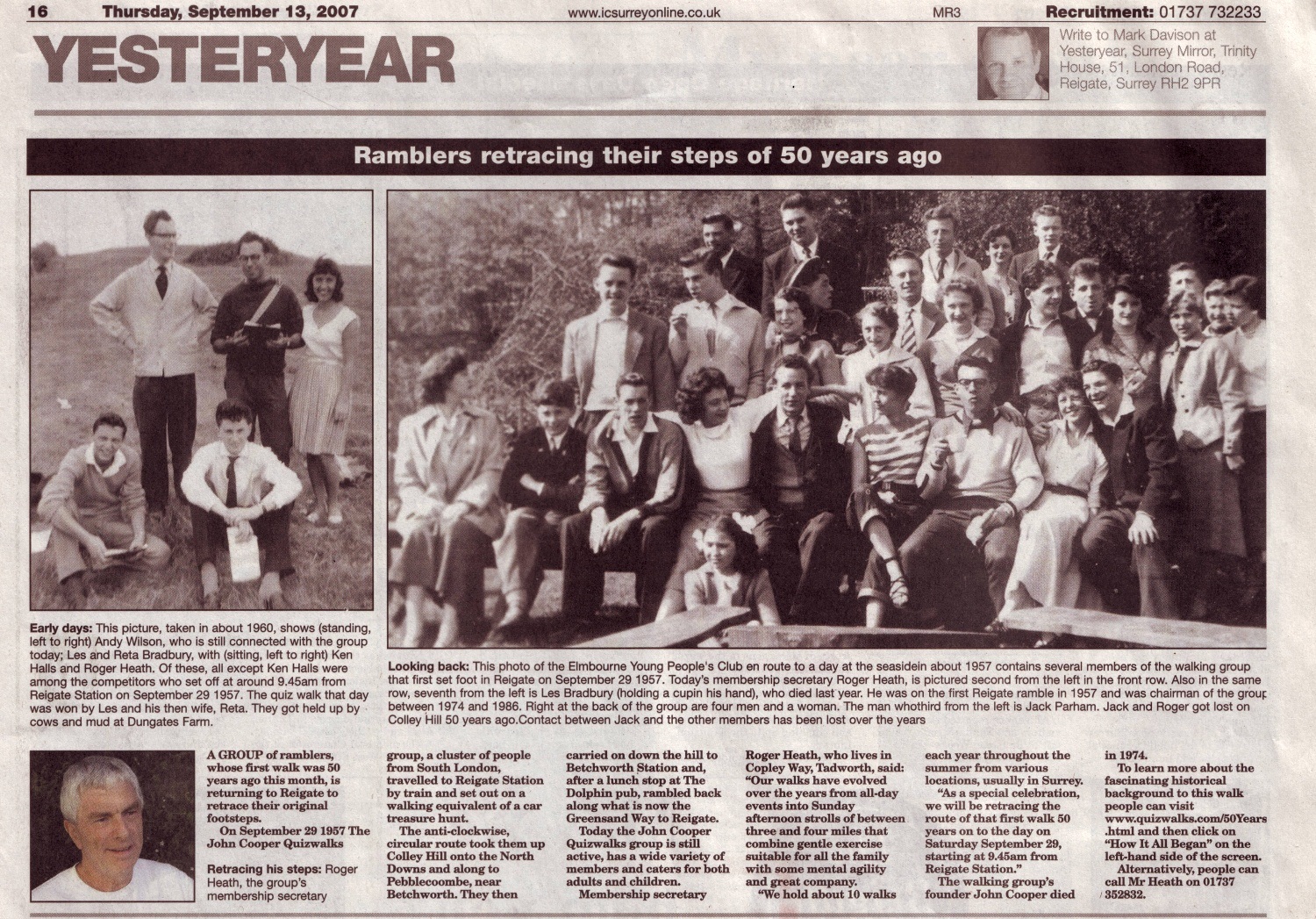 On the day of the walk the Surrey Mirror sent along a photographer to snap our assembled group ready for the off at Reigate Station. This photograph was published along with an article about the rewalk in the 4th October edition, as shown below. 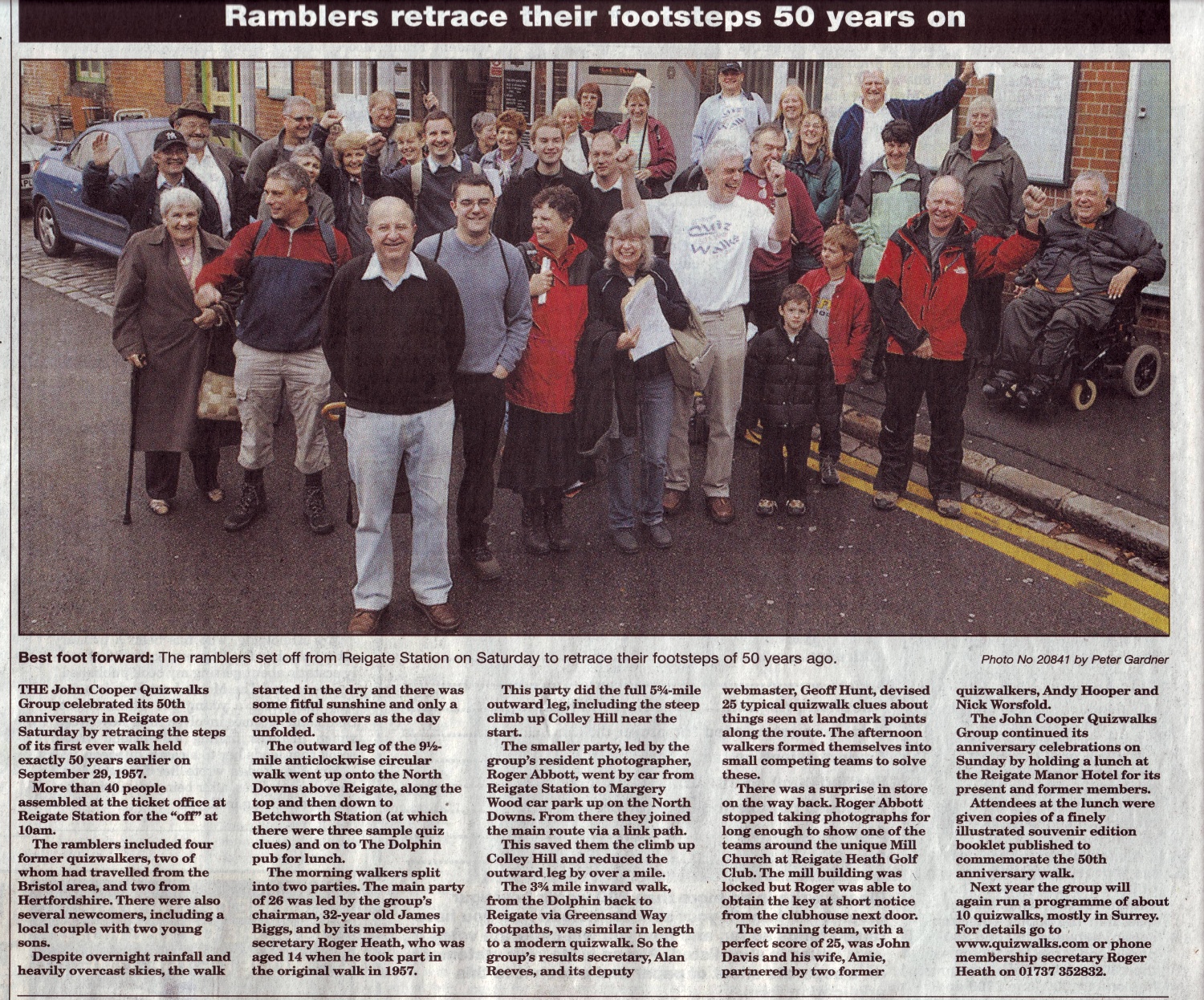 
Photo gallery for the rewalk.

46 people, 27 of whom also took part in the rewalk on the previous day, attended the celebration lunch at the Reigate Manor Hotel in its large private function room called Frith's Restaurant and Bar.

The lunch started with a selection from a magnificently prepared hors d'oeuvre table (a speciality of the hotel) and continued with an excellent carvery.

Photo gallery for the lunch party.

Attendees were given two handouts as they entered the restaurant area. The first was a booklet entitled 50th Anniversary Walk - Souvenir Edition. This beautifully produced A5 size booklet (for which all the printing and binding work was done by James, and his brother, Matthew) ran to 44 pages.
The Souvenir Edition gives a brief history of our club, shows how we reconstructed the 1957 walk using the original walk text as a backdrop, and ends with a section containing the route directions, cryptic clues and answers for the rewalk itself. And the whole thing is brought to life by judicious use of the late Les Bradbury's archive material, old and new photographs and specially-produced maps. Although the Souvenir Edition was the work of several hands including my own, I want to pay special tribute to Roger Abbott's contribution: his desktop publishing skills and excellent photography were indispensable ingredients in making the Souvenir Edition the success it was.

This was the second handout, which I compiled with the help of quizwalk organisers past and present.

My Three Favourite Clues - organisers' selections from their own walks in PDF format. 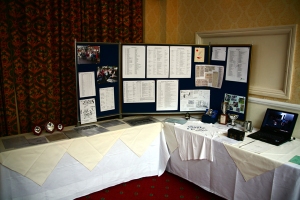 One corner of the restaurant area was given over to a memorabilia display. This attracted a lot of interest, having been expertly put together by Roger Abbott using a variety of materials such as press cuttings, old and new photos, original cartoons, trophies, and the like.

Some of these materials were tables I constructed from the archives kept by our late chairman, Les Bradbury. Among these were:

The Organisers' Table - a list of organisers along with summary info such as number of walks organised in PDF format.


The Honours Board - showing all League and Andi'Cap winners in PDF format.

A centre-piece of Roger's display was a revolving sequence of photographs he had set up on a PC. This brought the past and the present together by combining archive photographs with a number of excellent shots he had taken the previous day on the rewalk itself.

Roger also put together a selection of no less than 118 tunes from the years 1956 to 1960 which he played as background music throughout the lunch. The tunes included Paul Anka's Diana and The Everly Brothers' Bye Bye Love, both of which were high in the Hit Parade in September 1957.

The Hit Parade for the last week of September 1957 in PDF format.

After the lunch Roger acted as MC and introduced speeches by James and me. 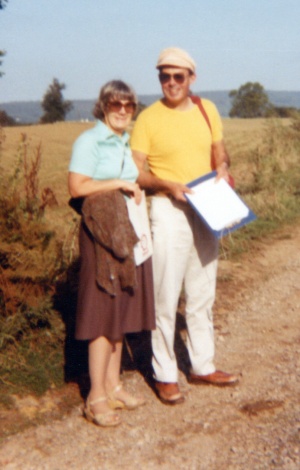 One of the really nice things about the lunch and the rewalk on the previous day was that we were able to welcome back into the fold a number of former quizwalkers, including Win Harper (for so many years the partner of our late chairman, Les Bradbury) and Peter Juneman. 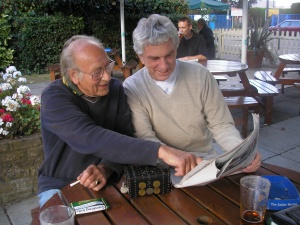 I traced Peter through the subscription website 192.com and surprised him, and his wife, Roma, by knocking on their front door one Sunday early in 2007. Peter and Roma were organising and competing in quizwalks as early as 1958, the first full season, and Peter was the first winner of the Andi'Cap Trophy in the following year. We had not seen either of them since 1968. The photograph shows Peter and me enjoying a drink together shortly before the anniversary weekend. 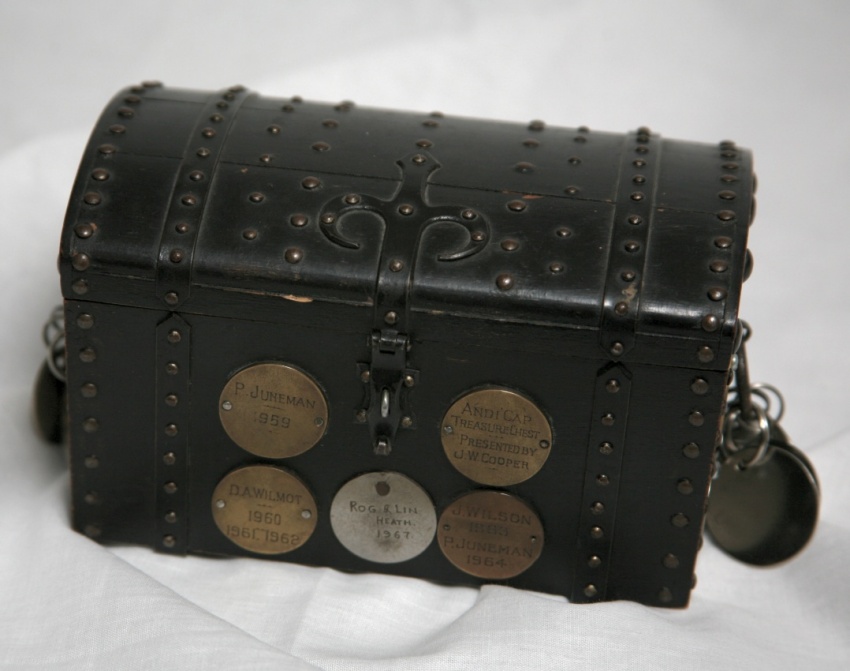 Peter was there at the lunch and witnessed during the presentation of trophies the award to the latest winner, Brenda Wooden, of the selfsame Andi'Cap Trophy, still bearing a disc recording his win in 1959.

The trophy for league winner went to me with my wife, Joyce Heywood, receiving the runner-up award. This win was very special for me and would not have been possible without the support of Joyce herself and of others who teamed up with us during the 2007 season.

Lastly, my thanks to everyone in the club, not least to my fellow members of the 50th anniversary committee, for their continued support of a pastime that has been part of my life for so long.