Quizwalks, as we call them today, were started by a club called the Elmbourne Young People's Club, EYPC for short. By the time of that first walk in 1957 the club, which also fielded two local football teams, was meeting one evening a week in a small hall it hired in Tooting, South London.

The hall had facilities for playing table-tennis, darts and snooker. Some evenings a card school would start up in a quiet corner; the game was always "Three Card Brag". There was also a record player around which jiving to the latest records took place.

The age range for the club was wider than its name suggests. In 1957 the club organisers, John Cooper and Frank Roberts, were both in their early 40s. At that time most members would be in their 20s, with a sprinkling of teenagers and thirtysomethings making up the rest.

The EYPC had a very cheaply produced newsletter called "News and Views". It cost club members "3d" a copy. In an edition published in autumn 1957 it says the latest records in the club collection were:

That same edition also contained an extract from the proceedings at the September meeting of the Club Committee. It read: "It was reported that arrangements were underway for a Hikers' Treasure Hunt to take place on Sunday 29th September, starting from Reigate." 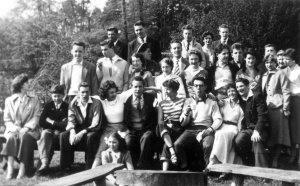 That was the beginning. It was called a Treasure Hunt then. And the first one, a circular walk from Reigate Station in Surrey, was organised by John Cooper and a club member called Derek Wilmot.

What made the EYPC's first Hikers' Treasure Hunt different, and still distinguishes quizwalks to this day, was that it didn't involve cycling or driving around the countryside. Instead it was about walking deep in the countryside and competing in small teams to try and solve a pre-prepared series of cryptic clues set by the organiser about things seen along the route.

For some years Treasure Hunts were all day affairs of about eight to ten miles, typically starting at around 9.45am to10.00am on a Sunday morning from a railway station, usually in Surrey. Almost everyone travelled by train as few owned cars.

As the following extract from the minutes of an EYPC committee meeting held on 8th May 1959 shows, Treasure hunters in those early days were given a generous time allowance to complete the route but got penalised if they finished late:

Treasure Hunt Rules - Time. It was decided to allow an overall time of 8 hours for the completion of Treasure Hunts. One point will be deducted for every 5 minutes taken in excess of this period.

In the 1970s we renamed our walks "quizwalks", which better describes what they're about. We now hold them on Sunday afternoons over routes of around 3 to 4 miles. They are always circular walks, and always start from a pub, not a station.

Organisers didn't make things easy for competitors in the early treasure hunts in the late 1950s. Today when you start a walk you get a complete set of directions along with the cryptic clues. Not so then. Instead competitors were given a slip of paper called a clue sheet covering the first stage of the walk only. They then had to scramble around at the end of that stage to find the clue sheet for the next one, and so on. As one of the early competitors, Brenda Marks, puts it in a piece published in the club magazine "News and Views" in December 1958:

Now these are usually little rhymes written on flimsy pieces of paper and usually number about 16. On most occasions they are hidden in the most awkward places, on top of l2ft. brick walls, outside public conveniences, inside pig sties and outside public houses which shut five minutes before you arrived. You are expected to scratch about until you unearth the now soaking wet clues.

The receptacles usually used to hold the clue sheets were tobacco tins with a label stuck on the front asking members of the public not to walk off with the tin on the day in question. But even with this precaution in place there were many stories in the early days of competitors not being able to find the precious tin that would take them on to the next stage - something that especially seemed to afflict those coming up in the rear of the field after their fellow competitors (albeit unwittingly?) had made that tin a bit harder to find!

Click for full size photo
Solution? A "panic envelope" system was introduced - competitors were given a couple of sealed envelopes at the start, one giving the location of the halfway point, for use if they failed on the first half, the other giving the finishing point if they failed on the second half. One such unopened "panic" envelope has survived from a walk organised by Peter Juneman that started from Cobham and Stoke D'Abernon station in 1959.

However, if you hold it up in good light you can make out the words SANDOWN TEA ROOMS ESHER on the flimsy piece of paper inside. Opening the panic envelope in those days cost you a points deduction, so we wonder if anyone who actually got lost on clues 7 to 11 back in 1959 was smart enough to do the "light" test.

The "panic envelope" also reveals another sign of the times: the finishing location, Esher, was different from the starting location, Cobham and Stoke D'Abernon station. Back then competitors travelled to walk venues by suburban train, not by car, so it wasn't essential to make the walks circular, although many organisers did.

The clues have also evolved over the years. Les Bradbury's records give pleanty of examples of early clues but perhaps the best description comes from John Cooper's pamphlet "How To Win Treasure Hunts by One Who Knows How But Rarely Does". This provides an excellent analysis of the types of clues set then with examples of what competitors would have been expected to know and understand.

As John said in this document "One of these days one bright spark or another is going to compose a hunt made up exclusively of abstract items. Then there'll be some fun!". Well, this just goes to show that John had superb predictive skills.

Link to John Cooper's pamphlet "How To Win Treasure Hunts"

Visit our clubhouse (main link above) and view photographs, club magazines, trophies, newspaper cuttings and other memorabilia from our past.