Between the inaugural walk on 29th September 1957, organised by John Cooper with assistance from Derek Wilmot, until his death in 1974, John Cooper made a prolific contribution. According to statistics compiled by Les Bradbury he organised no fewer than 46 walks in those 17 years. We owe him a lot.

My Dad
by Christine Cooper 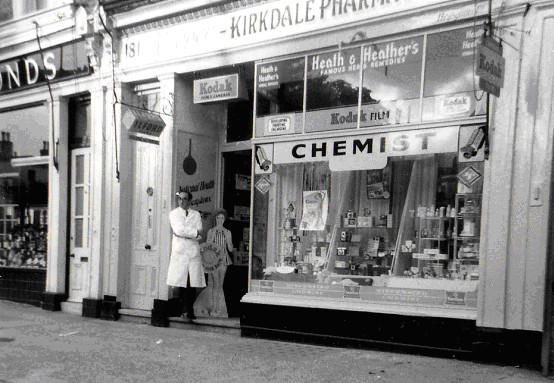 John Cooper outside his shop in the late 1960s

"Dad" - Where to start? Well, the beginning is always a good place.

Born in 1914 in a small village in Mid-Wales, the son of a Station Master, young John had leanings towards becoming a chemist and moved to London to study pharmacy; this was just before the outbreak of WWII. His devout mother's parting words to him were "to find a nice church".

This he did and it was not long before he was wooing a certain very young, blonde Sunday school teacher, my mum, Doé (as she was called by everyone).

Together they went though the blitz in their own inimitable style, by volunteering for the Auxiliary Fire Service; the local area of which was organised from the family home at Ravenswood Road, Balham and after being "bombed-out" themselves from past residences. This house was to become the hub of various local activities over the next few decades including local political committees, community groups and of course the beginnings of a youth club.

One of my earliest memories is being elbow deep in hot soapy water, standing on a chair, helping to wash up the cups at a monstrously large butler sink surrounded by the laughter of the club members. I was childishly aware of romances, feuds, teasing and spats, mishaps and tragedies going on around me in the grown-up sphere but for the most part it all passed me by. The "club-boys" would come around to the house, three or four times a week, to play cards, board games or just chat and they were just part of family life - the house was never empty, never quiet, never dull. Sometimes the house was suddenly plunged into complete darkness when the electric meter ran out and calls were heard for a "couple of bob anyone? - Dad teasingly referred to the electric meter as my moneybox.

I think for me the highlight of the year would be the preparation for the club Christmas parties - the committee would organise entertainment and games. The preparations were almost as much fun as the end result. Why was Dad rolling a big dirty car tyre over the back of his chemist's white coat? For him, as master of ceremonies, to be able to say at the club concert "A funny thing happened to me on the way here tonight…"

Treasure Hunts began, as you are probably aware, as car events, then cycle outings and evolved into the walking excursions that are the pre-cursor to the Quiz Walks of today.

I'm not too sure quite why Dad took me along planning these events, surely not for the company as I trailed behind at some distance, most probably whining for food, water or a sit-down at the very least. I'm assured today that these early trips were no longer than ten miles but I'm positive that on one occasion Dad told me that we'd walked eighteen, perhaps it was a psychological trick of some description. Often the wild grasses we walked through were taller than me and the country noises to a city girl were quite bizarre but we did have some quality time on these days as father and daughter.

[Sigh], it was obviously a completely different world back then…

With his longer adult stride, the distance between him and me would lengthen scarily and so absorbed in what he was thinking about, he appeared to not worry in the least at mislaying a child in the wilds of Surrey or that a predator might swoop and she'd never be seen again. I just tramped on behind, keeping his flapping old mackintosh in sight in the attempt to catch up with him. Of course, that happened as he stopped frequently to scrutinise a padlock on a gate, a metal manhole cover, some mysterious sarcophagus looking structure in the middle of a landscape of fern - goodness only knows where, or a pretty little cottage, down a cute little lane, with an innocent clichéd name that would eventually produce an anagram of something just a little bit naughty. He would make copious notes on his clipboard which accompanied him everywhere and which held a supply of plain paper, an appropriate ordnance survey map and the almost obligatory picture of a leggy pin-up although I'm not quite sure how that helped the "old" thought processes.

Net curtains in the locale might begin to twitch nervously, as we pursued our search for the unusual, and that mightily appealed to our shared sense of humour. The story goes that more than once, in these early treasure-hunting years, did a worried householder alert the police to sinister goings-on at the bottom of the muddy cul-de-sac.

Words and rhymes seemed to come very easily to him as did the accompanying sketches that he often drew. He developed a method of drawing his route maps that would begin at the top of the page and finish at the bottom despite the authentic map orientations. Although geographically totally inaccurate, they were very easily interpreted.

On returning home, Dad would sit at the kitchen table and with just two heavily nicotine-stained fingers, would tap out his ideas on his cumbersome Underwood typewriter, often chuckling heartily as he weaved his enigmatic clues into the iconic rhyming couplets.

Shakespeare himself would have got no better pleasure from a day's endeavours.

He had very dark, all-knowing eyes and they would sparkle mischievously as he worked and then he would often call out to share the wit or the joke with his wife and me; neither of whom could fail to appreciate his endless enthusiasm nor help be swept up and carried along by it.

The party only ever really got started when John Cooper arrived but he would be more than happy for this particular party to go on long after he left.

"Just turn out the lights when you go, folks"

P.S. I know he would want to acknowledge more than a "modicum" of help from his dear friends.