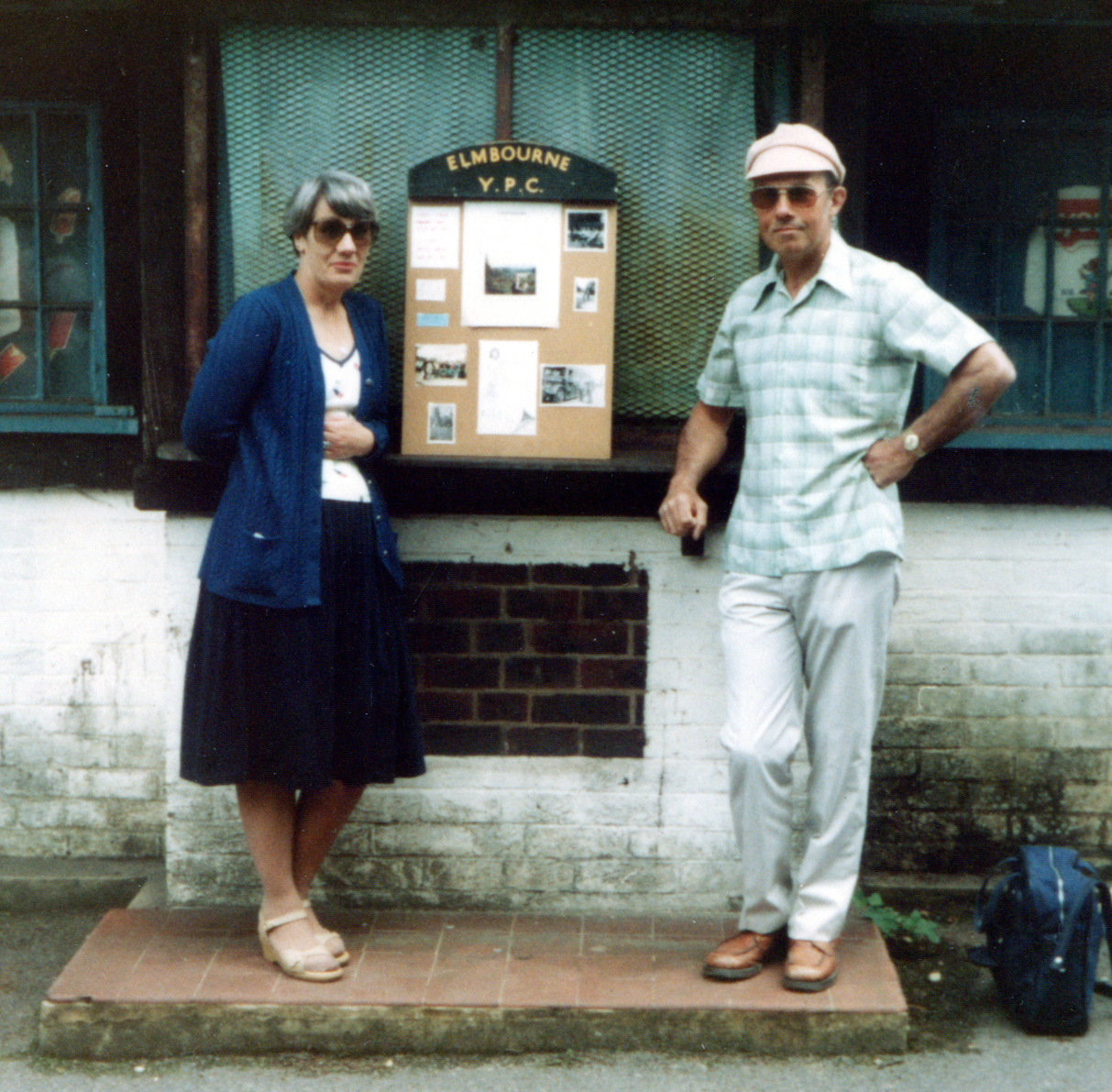 Win Harper & Les Bradbury in 1982
Les and I go back a long way. A little over 50 years ago I started going to a club in Tooting called the Elmbourne Young People's club. Les was already a member. As I recall, he was good at sports, especially football, and very keen on jiving, which in those days was the "in" thing for young people.

That club disbanded many years ago, but the reason Les and I have kept up through all these years is because of something the club started in 1957. Back then we called it a treasure hunt. But what made it different then, and still does to this day, is that we don't drive around the countryside, we walk in the countryside - and as we walk, we cudgel our brains trying to solve a pre-prepared list of cryptic clues set by the organiser about things seen along the route.

Today we call them quizwalks. And if you organise enough of them over the years (and Les certainly did, starting way back in 1958) then, as I know only too well myself, sooner or later you're going to mess up one of the questions you set.

Somewhere back in the late 70s this happened to Les. He'd given in his cryptic clue a total that came from adding up the numbers he'd seen on a bridge. His clue was something like: "Here's some arithmetic for you - The answer comes to 32." Well it didn't - it was 28 or something like that.

Of course, when the first team got back and gave their answers Les realised he'd boobed. So, did he own up straightaway when the rest of the teams handed in their answers? No, he stayed Mum just to see what would happen.

Now when Roger Abbott (and he's here with us today) was about to give Les his team's answer to that question, he suddenly asked him on impulse: "Les, can you add up." And with a twinkle in his eye Les laughed and said: "Of course I can't, mate. You ought to know that, Roger!"

Well, what this Roger knows is this: when you add up the contribution Les made to quizwalks over the years you get a very big number. Quite simply, a bit like a rock really, Les has always been there for us.

Les was there at Reigate Station on the morning of Sunday 29th September 1957 when John Cooper (the founder of our walks and whose name our group bears to this day) organised the first ever quizwalk.

Les was there in 1982, now with Win at his side, when we celebrated 25 years of quizwalks. In fact he was our chairman at the time - a job he did with great distinction for twelve years between 1974 and 1986.

Les was there on Saturday 26th June 1993, smiling out of the centre of a group photo which you can see on our website and which was taken when Ken White, a fellow quizwalker, and I both celebrated reaching 50 by holding back-to-back quizwalks.

Les was there at the Spring Tavern in Ewell on 29th June 1997 when, along with Win, he organised what turned out to be his last quizwalk. And, in the following year, Les and Win stopped competing in the quizwalks.

But they were both still there for us. They continued to come along to many of our walk venues for lunch and a chat - and they made a point of always attending our end of season lunch.

Of course, Les had many personal successes over the years on our walks. But we have from him another legacy that I rank as his greatest achievement.

Back in 1957, right from the word "go", Les has been the group's self-appointed archivist and historian. He's left behind a wealth of papers, which Win has kindly agreed to make available to us. And I believe these papers will, among other things, allow us to rerun that first walk when we hold our 50th anniversary celebrations next year.

Sadly Les won't be there for those celebrations - but we'll make sure that, as part of them, we honour his memory.

Let me finish by briefly sharing with you what some other members of our group wrote when they heard about his sudden death.

Robert Whale wrote: "The club has lost a real gentleman, one of the very best."

Rosy Treasure wrote: "A sad loss indeed. Never having known John Cooper, for me Les will always be the heart of quizwalking."

And finally this from James Biggs, our newly appointed chairman and at the age of 30 our youngest one ever: "I have only known Les in his later years, but his effervescent personality and his passion for quizwalks shone out from the crowd. Les always had a smile on his face and loved reminiscing about previous walks. He was a true asset to the club and will be greatly missed by all."

Yes, Les, we will miss you. But rest assured that in the years to come we will be out there in the countryside doing all we can to keep alive the tradition of quizwalking to which you contributed so much in your life.