In 1947 yours truly joined the Royal Arsenal Co-Operative Society Youth Club mainly to obtain a position in their Under-18 football team. I was successful and often took my uncle, Frank Roberts, along as a spectator. Unfortunately he is no longer with us but at that time he kept fit and was frequently lumbered with "running the line" and, when the right official failed to turn up, became the referee.

In November that year I didn't actually suffer the fate of Guy Fawkes but something fairly similar - I found myself in the R.A.F. to fight for King and Country. Well somebody had to polish the Spitfire! Frank however continued to support the team and, when the manager reached the age when he felt he could no longer actively manage, they asked Frank to take over. This he did in such good fashion that in the 1948/9 season the team won the R.A.C.S. Trophy (London Youth).

During 1949 seven of the football members joined the Forces and it was decided not to enter a team for the 1949/50 season. However, a few of the old club 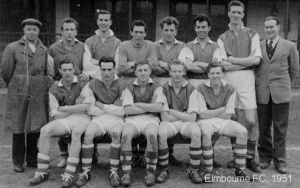 members were demobbed and found there was no team for them to re-join. This brought about the decision to start a new club and football team so, for the 1950/1 season they formed The Elmbourne Football Club and entered the 6th division of the Balham & District League.

In November 1949 I too received my demob papers, returned home, and was taken by a friend to the Methodist Church Youth Club in Lynwood Road, Tooting. One evening, shortly after joining, my friend introduced me to a leader from another Methodist Youth Club who he had previously met and happened to be at our Club that evening. Later that evening the visitor said to my friend "Why don't you bring your mate down to Sunshine Hall" (in Colliers Wood). This he did and reintroduced me to the Leader. This was the start of my friendship with John Cooper.

Although too old for Youth Clubs, having reached the great age of twenty, I became a member of the Young Peoples Club at Colliers Wood, a friend of John Cooper and soon a Committee Member of the Club. It was in 1950 that an ex-committee member dropped in whilst on leave from the Army and brought along a friend. This was my first meeting with Arthur (Andy) Wilson, who became a regular member of the Club once he was demobbed.

Around this time Elmbourne Football Club hired a room over the R.A.C.S. Greengrocers shop next to the Mayfair Cinema in Tooting on Thursday Evenings to select the team, collect subscriptions, etc. It was decided to have larger premises and I suggested Lynwood Hall. The hall was hired on a regular basis and we became The Elmbourne Sports & Social Club with darts, table tennis and billiards.

In 1955, club nights during the football season were always well attended but in summer months they fell to such an extent that the 6d subscription per person per evening failed to cover the £1 evening rent. It was also around this time that the Methodist Church was pressurising John Cooper because of the poor attendance at the Church by his youth club members. I suppose this was reasonable as John was the only regular Church attendee. 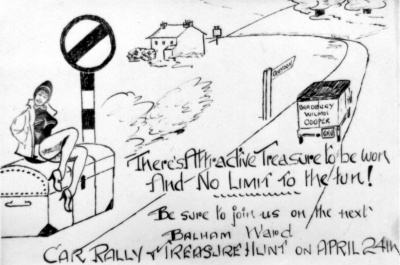 Being a member of both clubs I suggested a merger. This idea was accepted, resulting in John Cooper and Frank Roberts becoming joint leaders of The Elmbourne Young Peoples Club holding meetings at Lynwood Hall. Unfortunately we had to leave the premises when they were taken over by London Transport to use as their uniform stores. We moved to the bigger Bruce Hall in Franciscan Road Tooting, which has now been demolished.

The club had quite an eventful year in 1957. John Cooper (who didn't drive) had been taken on a car rally run by The Clapham Park Conservative Club of which he was secretary. He had been so enthralled by the event that he decided to run one for our club, but on bicycles because none of us possessed a car at the time.

On 26th May the first Treasure Hunt took place. Four pairs and one trio set off from Tooting Bec station at 15 minute intervals. The first stage ended at "the park with no name" (Nonsuch Park). Lunch was in Wooden Café (since burned down) and finished at a café in Epsom at 8pm. Andy Wilson and I were both competitors that day, albeit in different teams. Being such a success a second cycle hunt was organised but Frank felt left out and asked

"What about the hikers?" John promised to think about it and on 29th September 1957 the first Quiz Walk took place from Reigate Station. The E.Y.P.C. was then at its peak: there was a 2nd XI football team (in 6th Division with the 1st XI in 2nd Division), three table tennis tables, battington and rock 'n' roll (with jiving round the record player).

From then on most activities declined over the years. Except for the all-day rambles which have become Sunday afternoon Quiz Walks. Otherwise there have been only minor changes to the format.

In 1965 the Club changed its name to The Thursday Club which was something Frank had been trying to effect for several years. This happened whilst I was not around to stop him. In 1974 as a tribute to, and in memory of the originator, the name was once again changed to The John Cooper Quiz Walks.